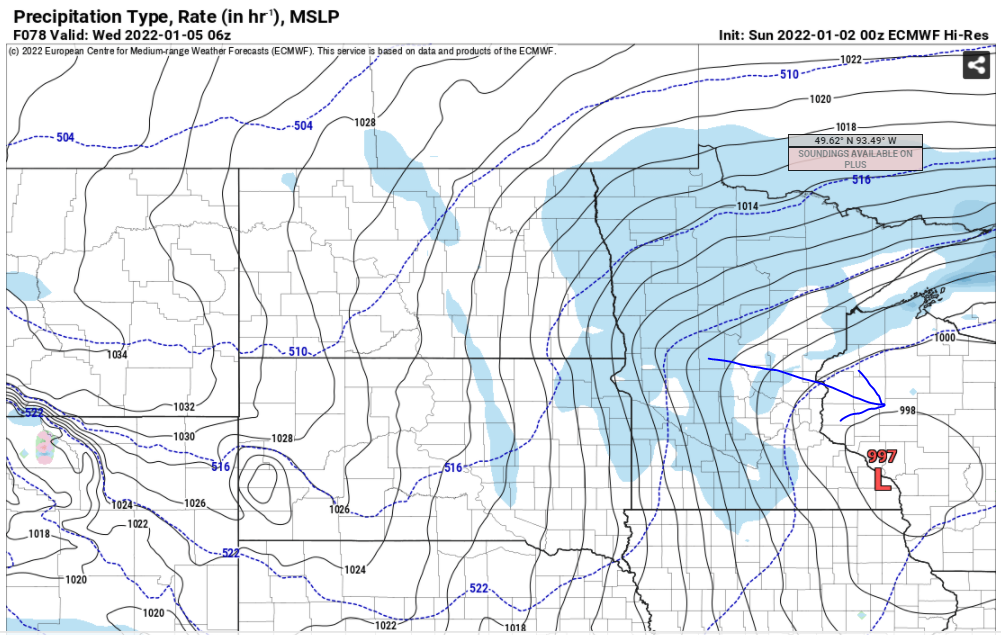 We’ve nearly made it out of our first major cold snap in the Twin Cities and have some 20s or even upper 20s/low 30s on the way for Monday and Tuesday. That jump in temperatures is your first clue that it’s January in Minnesota and cold temperatures and snow are on the menu.

Tuesday night to Wednesday we’ll see another cold front slide through MN and not just drop our temperatures right back down (below zero highs by Thursday), but also give us a chance of snow.

You can see some light snow sliding in, and that snow will continue through the morning commute in the Twin Cities. Likely, due to the incoming temperatures, a very fine snow that’ll accumulate to roughly 1.5-2″ of total accumulation over about 6-12 hours.

After that, and throughout Wednesday, we’ll watch temperatures fall. By the middle of the day we’ll be in the lower teens, and continue dropping all the way to below zero overnight:

If you look at that forecast above, you’ll note that on Wednesday not only will we be cooling, but look at those winds midday Wednesday, creating some blowing snow scenarios in the Twin Cities and beyond (especially beyond) and wind chills that’ll feel much colder than 10-11°.

There is some hope, temperature-wise. Even through we’re dropping to another sub-zero high for Thursday, we warm back into the 20s for Saturday, which should allow many of us to enjoy our Minnesota winter! Stay tuned.