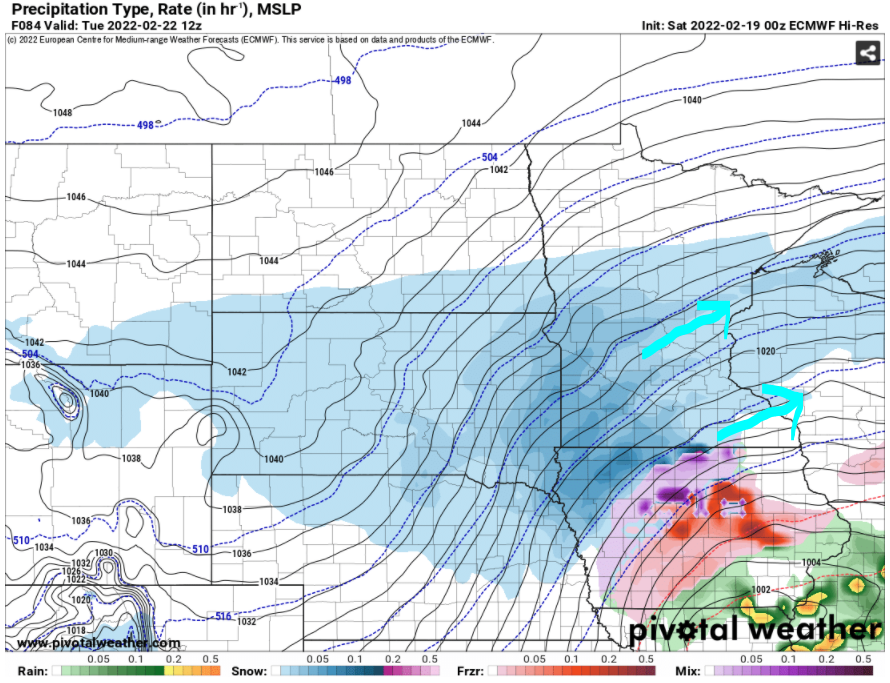 It’s only Saturday and this weekend looks balmy (ok, Sunday looks warm-ish, near 40°, but we’re already starting to think about an incoming snowstorm for Monday-Tuesday in the Twin Cities and across much of Minnesota and Wisconsin.

6 a.m. Monday – We’ll likely start to see some light snow start to creep in. Just enough to start to coat some roads around the metro area (bias now toward the north metro, but be aware that it’s trended slightly south of late in later model runs)

12 p.m. Monday – Snow picks up in the Twin Cities, still with the southern suburbs getting just light snow (per latest model runs) and the rest of the metro starting to accumulate. We could easily see a couple inches of snow in Minneapolis/St. Paul by Monday evening.

6 a.m. Tuesday – Fast-forwarding to Tuesday morning is when we’ll see the heaviest snow chance move into the Twin Cities, with some slushy/icy mix in southern MN. That means we’ll be seeing wetter snow (so heavier in quantity, and also less fluffy) over the Twin Cities. Here’s the future radar:

Between 6 a.m. Tuesday and Tuesday afternoon, we could easily pick up 3-4″ of snow, which definitely makes it the heaviest snow period.

When you add up that 2-3″ of snow + another 2″ + snow from Monday, you’re starting to look at a very lengthy and snowy storm, with totals in Minneapolis/St. Paul close to 7″ or more.

We’ll keep an eye on this one, as both the American GFS and the European ECMWF are showing roughly 7-8″ in Minneapolis/St. Paul (although they bring in more water at different times). The end takeaway should be that Monday-Tuesday look snowy throughout the duration, with the easiest travel period being Monday morning.