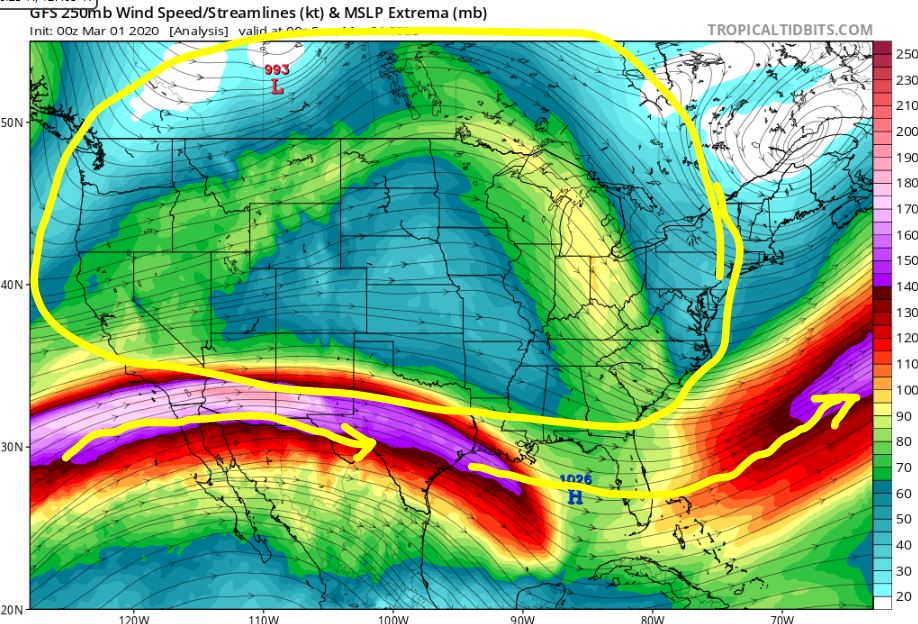 You may have noticed that we’ve been a little warmer than average for February the past couple of weeks in MN. Well that’s a thing. When we started February the average high was still 25° at MSP, yet we averaged nearly 30° for the month — including some below zero days.

We’re entering March in much the same fashion, as NOAA’s Climate Prediction Center issued updated guidance as run after run of long-term models are showing warmer weather over Minnesota (and apparently much of the eastern U.S.). Here’s the March guidance at this point:

That 50-60% chance of above-average temperatures is nothing to sneeze at, as typically these maps indicate something larger-scale is happening… not just that we might be warm. In this case, the jetstream is set up quite favorably for those in the eastern United States (sorry Portland and Seattle — my grandmother and I noted that if weather was good in Portland this time of year, it’d be cold in MN, and vice versa).

So using today’s weather as an example, you can see a nice ridge in the jetstream:

It’s part of what’s called a “split flow” pattern, as the “real,” or main, jet is indicated and much stronger… but the split flow pattern still brings above-average temps to us in the north, and we’ll take it. Essentially, north of the split jet we’re under would be 20s or colder, we’re in the 40s+, and south of that much stronger jet you’d find 70s or higher. We can dream.

What happens temp-wise this week? We’ll see the jet dip south again, and temperatures drop a little bit (that’ll be your Monday dip in temps). That’ll be followed by what might be our first 50 degree day of the year next weekend. How is that set up? Well, look at next week’s jetsteam:

Given temps in the mid-40s forecasted for today with a much weaker jet, if next week’s forecast comes true and we see a strong ridge in the jetstream centered directly overhead, don’t be surprised to see temps well into the 50s for highs for some folks.