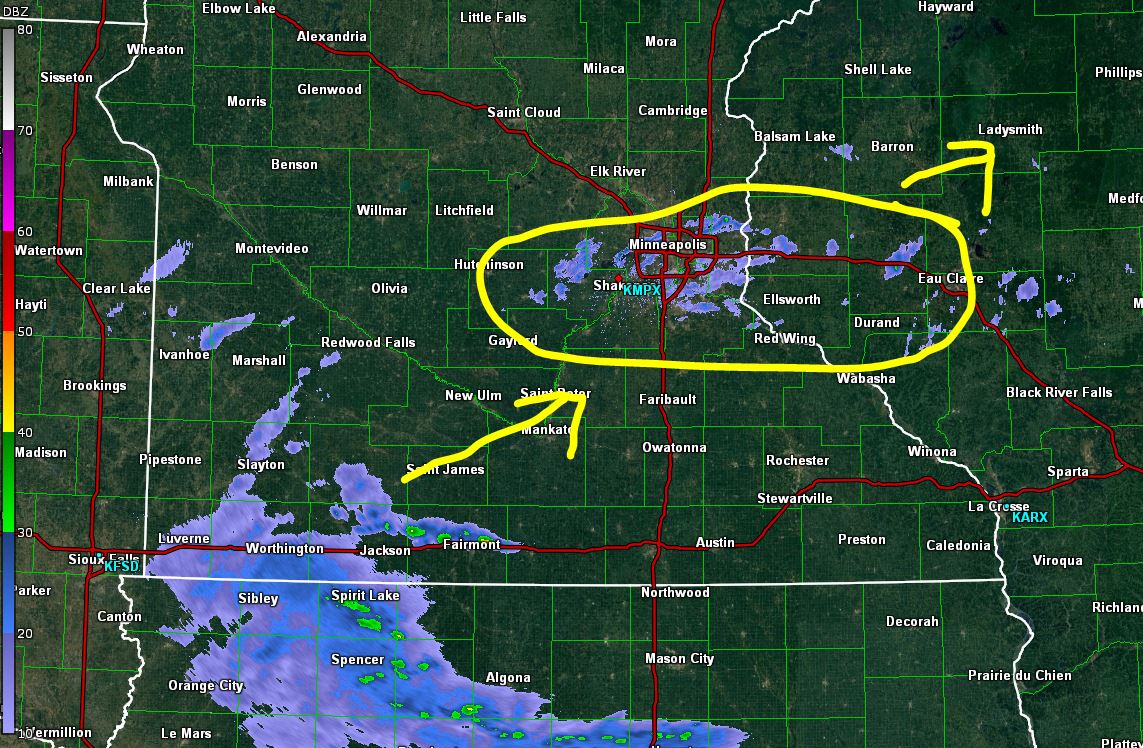 Well, I’m/we’re onto day four of quarantining at our house in Minneapolis. Hopefully you’re at about the same point, or even longer. We’ve gone on lots of little/longer walks, some biking, and some running — but so far the weather hasn’t really been our friend.

Today is more of that trend. We’re seeing a fairly significant spring/late-winter storm moving into the Midwest, which will bring us periods of rain today… and even some thunder in southern MN, followed by some snow chances.

As of 7:30 a.m. this morning, you could see rain over the Twin Cities in this radar view:

Note that larger/wider swath of precipitation SW of St. James in far southern MN. That’s our next round of rain — which’ll likely arrive by late morning.

Taking this from the current radar to the future radar, here’s a look closer to around 1 p.m. this afternoon:

Those yellows and deeper greens indicate moderate to heavy rain chances, and from about Rochester southward we could hear some rumbles of thunder.

You can see the blues in that map above. Thankfully, the snow chance stays farther north and west, and stays minimal in the early going. The better chances for snow in the metro area comes around 6-7 p.m.:

Unfortunately, some of us may wake up to an inch or so of snow on the ground (more is possible/likely, but most will melt on contact or shortly thereafter).

Overall snowfall predicted by high res computer models puts bands of 2″+ out there, but as I mentioned, much of that will melt on contact:

Don’t look too closely at that map above, because those narrow strips of forecasted snow could easily shift north or south slightly, which would dramatically change things. Luckily (in a way), most of us are home anyhow.

Stay tuned, and most importantly — stay in and stay healthy/safe.