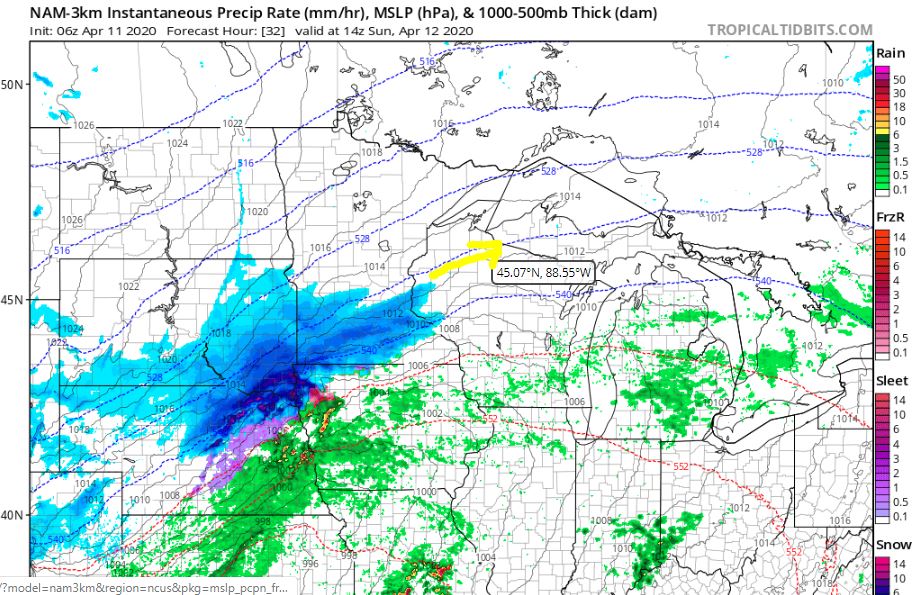 The past two Aprils we’ve hit some rough patches, weather-wise, in Minnesota. Two years ago it was 14 or so inches of snow in the Twin Cities. This year it looks less likely that Minneapolis/St. Paul will see a direct hit, with more of a glancing blow for us and heavier snow in SE MN and central/northern Wisconsin.

All that being said, it’s important to note that accumulations of snow are still possible in the Twin Cities. In fact, to highlight that point the National Weather Service has a Winter Storm Watch in effect Sunday to Monday:

We (in the Twin Cities) are more in the “just in case” camp on the winter storm watch — but we should all be planning on at least minimal slushy accumulations.

First of all, today should be a decent day. Highs in the middle to upper 50s, some sun and some clouds. It’s not until overnight tonight to Sunday that those flakes would arrive.

Here’s the future radar around 6 a.m. on Easter Sunday:

You can see plenty of blue, but that snow it indicates on the future radar map is mostly over South Dakota and far SW MN. That changes quickly as moisture surges north. Fast forward three hours:

Already, then, we’ll see light snow in portions of the metro area by 9 a.m. on Sunday.

By noon Sunday we’ll be seeing some of the heaviest snow over places like Rochester and Mankato, with the added potential for thundersnow due to some instability being wrapped into this system:

Look closely at that map, though, and the map below. Specifically at Hennepin and Ramsey Counties (and the surrounding metro area). What you’ll notice is that even though we don’t get the heaviest, deepest blues, we do have some form of snow over us for many hours in this model run:

That image above is still showing light to moderate snow around the metro area as late as 5-6 p.m. on Sunday. Snow tapers after that point, wrapping up into the wee hours of Monday morning, leaving the Twin Cities with a likely 2+ inches of snow farther north, with folks farther east/south seeing closer to 4-6+ inches. We’ll want to keep an eye on how this storm develops, because there’s a definitely possibility we could slide those totals either up or down.

You can see the high-res NAM shows an incredibly sharp contrast in snow totals below:

In northern Hennepin County, near places like Rogers, you’re looking at closer to 2ish inches of snow. Meanwhile, near Bloomington you could see closer to 4-6″, with higher totals possible farther south and east.

Either way, after the snow is when we’re stuck in a cold rut post-snow. We’ll see highs struggling to get into the upper 30s through Tuesday, at least, and possibly into Wednesday as well.