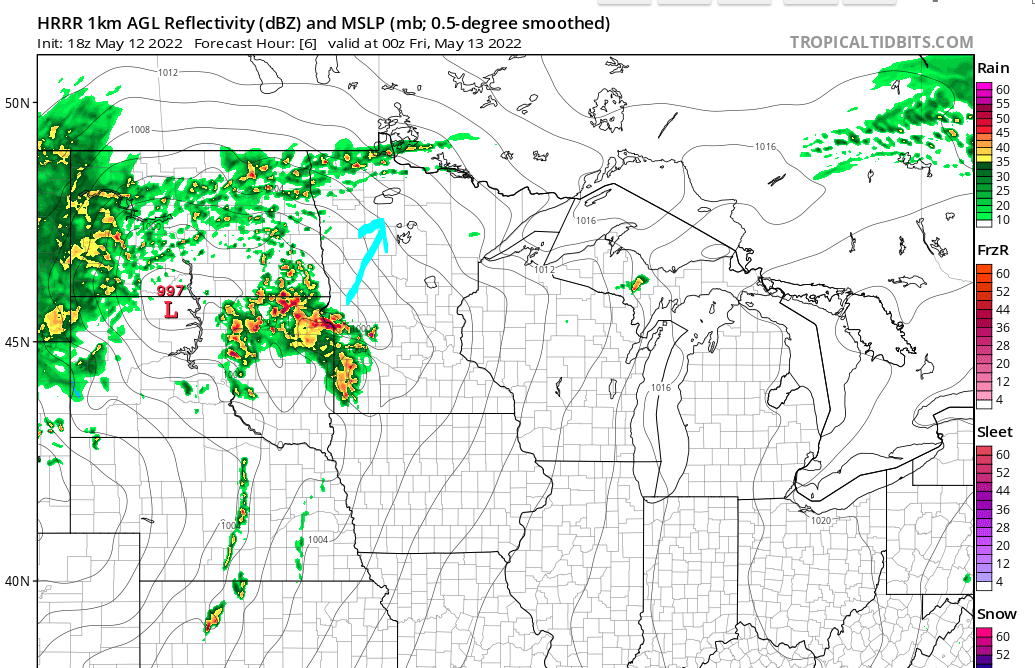 5/12/22: Another night of strong storms in Minneapolis/St. Paul

Last night was the first time in recent memory I’ve heard tornado sirens from a real tornado threat since moving home to Minneapolis in 2011. With a strong bow echo/MCS (mesoscale convective system) we saw straight-line winds strong enough to knock over trees at 80+mph, plus the threat of spin-up tornadoes mixed within. Yikes.

Tonight, we watch as yet another severe storm threat is brewing over the Upper Midwest, with another high probability of severe-level winds in excess of 55mph, as well as hail and some tornadoes. The tornado threat grows as you head west of the Twin Cities.

So what is happening? We’re watching an area of low pressure over the Dakotas working its way east that’s drawing up significant warmth and moisture (you can certainly feel that outside today in Minneapolis). Here’s where the warm front was located as of 11:30 a.m. today:

As that low continues to develop, we’ll watch for storms to fire around where the cold front, low pressure center, and warm front meet — as well as along the warm front in central Minnesota.

South of that warm front is robust storm energy as well as surface winds from the SE, with winds a mile up that are more from the S, creating a potential for rotation in any storm that forms.

You’ll see some of those storms forming later this afternoon over eastern South Dakota, and here’s the 7 p.m. future radar:

Note that narrow band of storms over central Nebraska. If you draw a line northward and compare to that surface map a couple images above which shows all of the United States, that’s where the cold front is and those storms will likely become our own threat for storms over the Twin Cities and the rest of eastern Minnesota.

All in all, tonight over the Twin Cities could be a similar event to last night’s storms — only while most of us are asleep. There’s the added risk of increased tree damage because after 2+ inches of rain in many places the ground is saturated and soft. Please be safe, turn on your weather radio before bed (or download an app in a pinch, there are some good ones), and stay tuned!