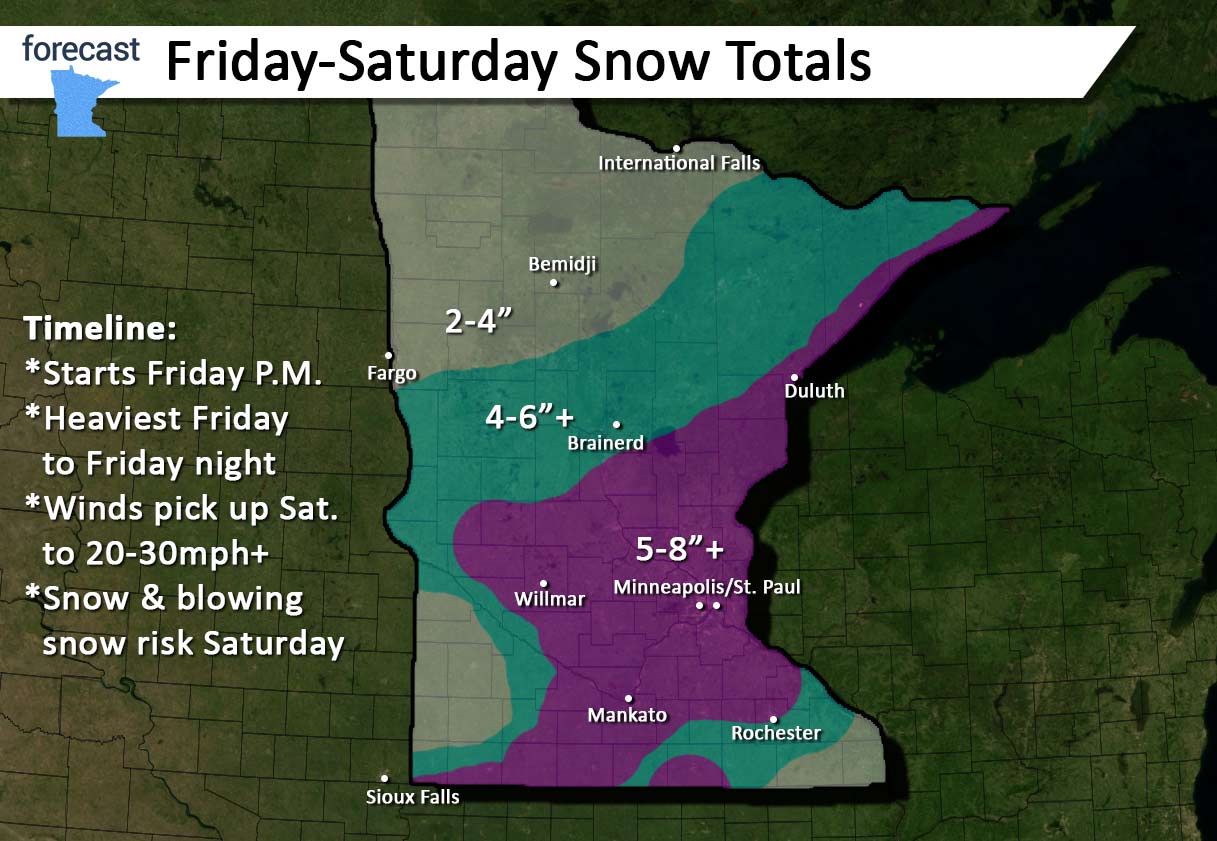 There’s quite a bit of snow headed to Minneapolis/St. Paul, and really much of Minnesota. Over the past few days totals have stayed steady in the 6-8″ or 6-10″ range for Minneapolis, and that remains true today.

The other factors to talk about include timing, winds, and temperatures — so here we go!

It’s important to note that wind and blowing snow on the backside of this storm will be a major issue – creating blowing and drifting snow, and even ground blizzards in some more exposed/rural areas.

That being said, here is the wind forecast for Saturday morning, as that wind picks up rapidly. Note how interesting this looks like – almost like a radar view instead of wind:

That blob circled above is NW wind 25mph+, with gusts even higher. That’s not a good ingredient when you have 5-8″ of fresh powder on the ground. By Saturday evening winds drop, but from mid-morning Saturday onward, temperatures drop and winds stay strong (we’ll drop from the 20s in the morning to single digits by afternoon, then below zero overnight).

Let’s talk about the snow timing, now, as that’s probably what brought you to this forecast.

Jumping to midday today – Friday – we look at the future radar around 12-1 p.m. today:

You can see in that future radar view that heavy snow (dark blue) is already closing in/over the western Twin Cities suburbs, and moving right into Minneapolis and St. Paul. That map depicts 1 p.m., so essentially between 12 and 1 p.m. we’ll see snow build across the Twin Cities, and probably by 1:30/2 p.m. through St. Paul, if not earlier.

The initial snow will be the heaviest of the entire storm.

The initial snow will be the heaviest of the entire storm. That means anybody stuck at the office while heavy snow falls will have a tougher time getting home — by evening snow tapers. Here’s just 3-4 hours after this initial forecast, where I’ve indicated Hennepin County with a yellow dot:

At this point we’ll see snowfall rates slow down slightly, although we’d still get 0.5″ to 1″ per hour totals. As the storm wraps itself around and builds east, we’d see one more gasp of slightly heavier snow overnight:

That future radar image shows snow tapering over western MN around 4 a.m., but a quick dose of additional light accumulation over the Twin Cities metro area. The forecast challenge then shifts to blowing and drifting snow, as discussed at the top of this forecast.

Stay safe and don’t get caught by the drifting snow and dangerous temps coming this weekend!