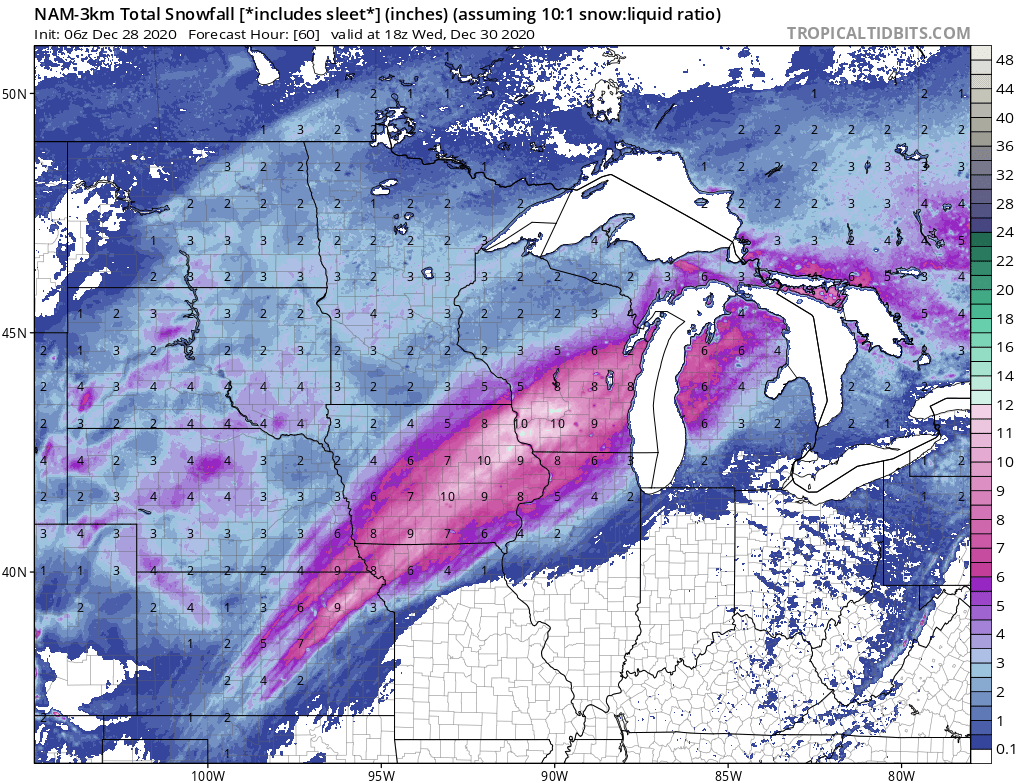 After seemingly months of winter without snow in the Twin Cities and much of Minnesota we’ve now found ourselves right in the crosshairs of two storms in a week, and another is on the way.

Last Wednesday’s storm ended up leaving us with nearly 9″ of snow at MSP, and yesterday’s couple of inches added on to that. This next storm looks “graze” much of Minnesota (the bullseye would be over much of Iowa and Wisconsin), but will still add at least another inch or two to our recent tallies.

Here’s the latest high-res model output as of early this morning, showing some pretty intense snow totals over Iowa and WI:

Note that despite the wide swath of heavy snow, there’s an even wider zone of 2-4″ of snow. That’s our future snow.

Looking at timing, the initial flakes look to come in a fairly organized line early afternoon, likely 1-2 p.m., on Tuesday. It doesn’t look like heavy snow, but consistently light over several hours.

By early Wednesday morning as folks wake up for work, you’ll see most, if not all, snow showers have come to an end by around 3-4 a.m.

We could still see a few light snow showers curl in as the overall system slides east, but overall we’ll have seen our accumulations come to a close by then, with 2-4″ of snow on the ground in the Twin Cities, and much more falling over portions of IA and WI.

Overall, the pattern is really messy — the jetstream was split with a northern and southern branch up until last week, and there are no well-defined troughs or ridges this week either.

Note the extremely weak winds over the Midwest and northern Rockies. Contrast that to the 140+ knot winds over the eastern Great Lakes and over the Pacific Ocean.

Eventually that sort of organization will come back here, but for now that this trend should keep us a little quieter in the short-term, despite this next snow event.

is there a way to get the amount of snowfall in st. paul, mn on a day by day basis