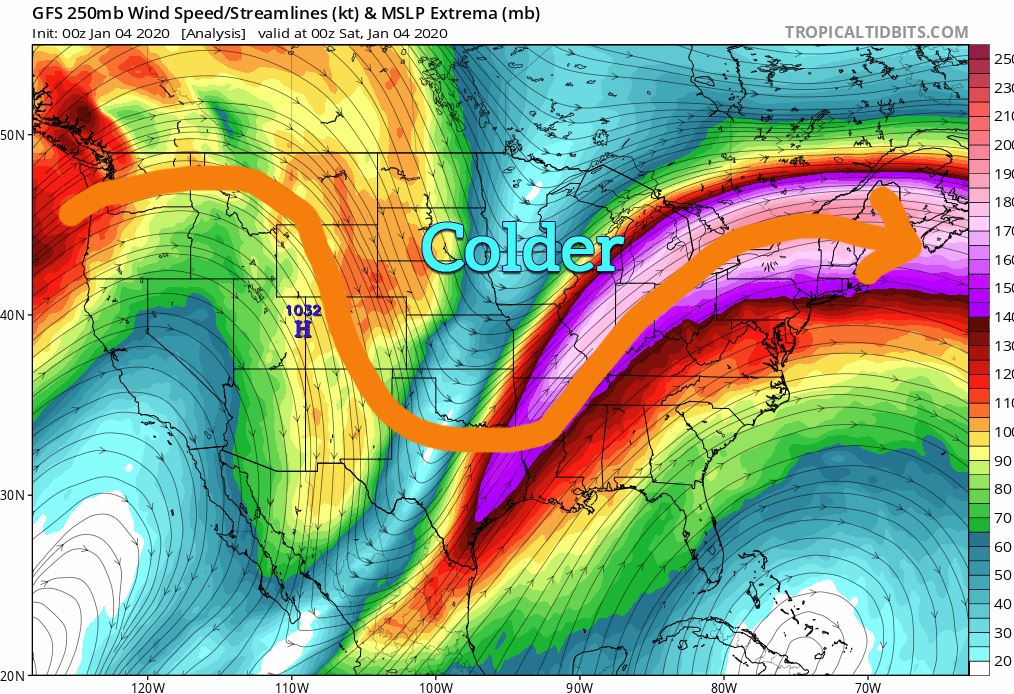 Over the past several days, we’ve been anywhere from 5-10 degrees above the average high in Minneapolis/St. Paul, which is now down to 24°.

Today’s high drops a little bit closer to that, but then we get a one-day surge of warmth for Sunday, a surge that’ll bump our temps back into the middle 30s as it also brings us a chance for minor snow accumulations.

Here’s the jetstream setup, which shows a quick-moving trough of colder air over Minnesota as we entered Saturday morning:

Note that region over Montana and Wyoming, where some slightly warmer air (a ridge in the jetstream) is located. That region slides over Minnesota as we head into Sunday, then, and brings with it the chance of snow showers.

Looking toward Sunday morning, you can see by around 4-5 a.m., snow showers show up on the high resolution future radar:

As of now, it looks like half an inch or less of snow is what we can expect in the Twin Cities, as that band you see in the future radar map above doesn’t look to grow.

Northern Minnesota, closer to Virginia/Eveleth and the Boundary Waters, it’d be easier to see 1″+ snowfall in those regions with this quick-moving system.

After this system, we cool off once again, with temperatures back into the 20s early next week. Our next chance for any accumulating precipitation doesn’t appear until toward the end of the week. Stay tuned!