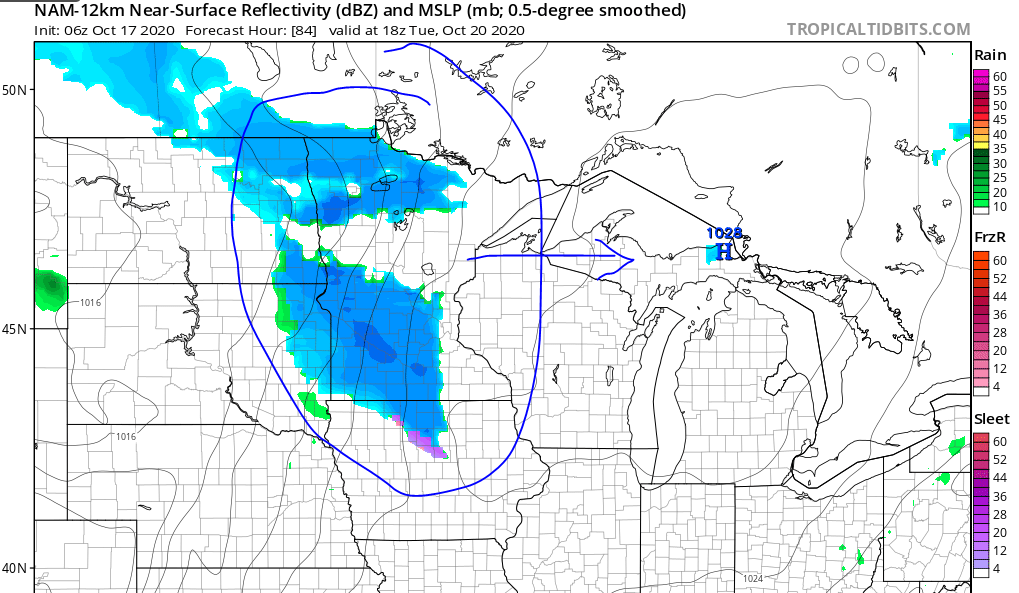 Just a week or two ago we were talking about our 2nd 80° day in October for the first time since 2011. October felt like an extension of early September in the Twin Cities. Then the jetstream dipped and we entered that part of October that always comes: the part where temperatures reach the upper 40s to lower 50s, if we’re lucky.

That’s the stage we’re at right now — the pre-winter phase. Hopefully we’ll get a surge of late-season warmth, but for now we’ll look for sunny days to help us stay warm. Here’s a look at our extended forecast for Minneapolis/St. Paul:

So what separates us from the warmer weather we were just recently having? A major dip in the jetstream — or really, more of an overall shift. The jetstream is essentially the divider of colder air to the north of it, and warmer air to the south.

Here’s a look at the jetstream forecast for tonight:

What that dip allows is for some very chilly temperatures to move into lower Canada and northern MN, but also the Twin Cities. Here’s the temperature forecast for the same point in time tonight, but about a mile up in the atmosphere:

Add to this colder stretch the possibility of precipitation, and you’re looking at a decent chance for snow or at least a rain/snow mix heading into Monday night and Tuesday.

Already, as I write this Saturday morning, northern Minnesota looks to get a dose of snowfall accumulations as a system races across the state:

Our own weather has been more just damp, with rain sliding east, but looking ahead toward Monday night and Tuesday is when our chance of a rain/snow mix, with possible periods of just snow, arrives.

Right now I’d expect any accumulations to occur on grass or metal surfaces, and those to last minutes instead of hours. It’s a sign, however, that actual winter weather is just around the corner.

I do see some glimmers of hope, temperature-wise, in the very very long-term forecast. Long past when I trust a computer forecast model enough to share screenshots. However, the trend is a good one, as if it panned out even in the coldest version you’d be seeing highs in the upper 50s near Halloween/early November for a day or two. Stay tuned!