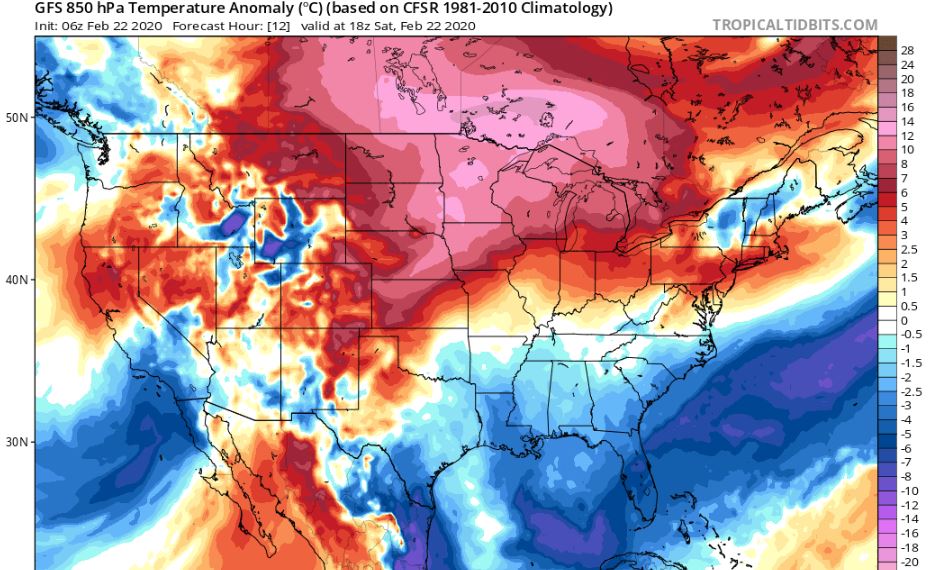 Saturday 2/22/20: Warm weekend ahead in Minneapolis

Today’s looking warm, for February, in the Twin Cities. We’re looking for highs in the lower 40s in Minneapolis/St. Paul, with plenty of sunshine. You’ll watch some of those stubborn ice chunks on the roads disappear in what could only be enhanced by an above-freezing night (which we won’t get, unfortunately).

Here’s a look at the temperature anomaly map, which essentially calculates temps vs. the climatological averages, and I’d say it can’t get much more impressive for a late-February day:

Those pinks/reds indicate temps about 10 degrees Celsius, or 18 degrees Fahrenheit, above climatological averages. Not too shabby.

Looking ahead, we stay above average through the start of next week, and then dip by midweek:

By Wednesday and Thursday we’re back near 20 for highs — but it’s important to note that as of now I really am not seeing anything in the next two weeks that would get much colder than that.

By Saturday to Sunday of next week we’ll look for the possibility of another temperature rebound, so stay tuned!