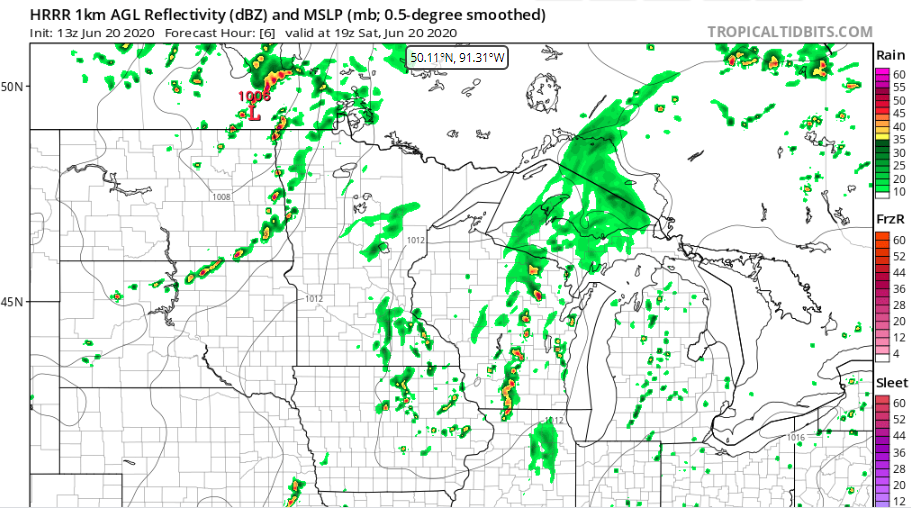 After a fairly dry and windy start to June in Minneapolis/St. Paul (and across much of Minnesota), we saw a sharp change with Thursday’s rain — with 1″+ readings throughout the metro area.

Now, we’ve switched from a dry pattern to one that includes a number of not-quite-a-sure-thing rain chances. Starting with today. We’ll go through some future radar maps after a quick look at our 7-day forecast:

It’s important to note that after seemingly days/weeks without any rain chances leading up to Thursday, we now see at least an outside chance of a storm six of the next seven days.

What you see in the map above is a chance for scattered showers (which means a higher chance than an isolated storm), but also quite a few areas that may not see rain. I’d wager you’ve got about a 50/50 chance of rain today.

Looking to Father’s Day, tomorrow, there’s an outside shot of lingering showers from western MN impacting us Sunday morning (early), but the main chance for storms arrives in the afternoon once again. Here’s the future radar:

That future radar view above shows us the picture around 3 p.m. Sunday, with a possibility of a thunderstorm and downpour not out of the question.

Looking toward Monday, that’s our most likely day to receive rain (since this is a forecast and we can’t know what’ll happen today or tomorrow until it happens). What I’m seeing is an early-morning chance of storms/rain on Monday, and a possibility later in the day as well. Stay tuned!