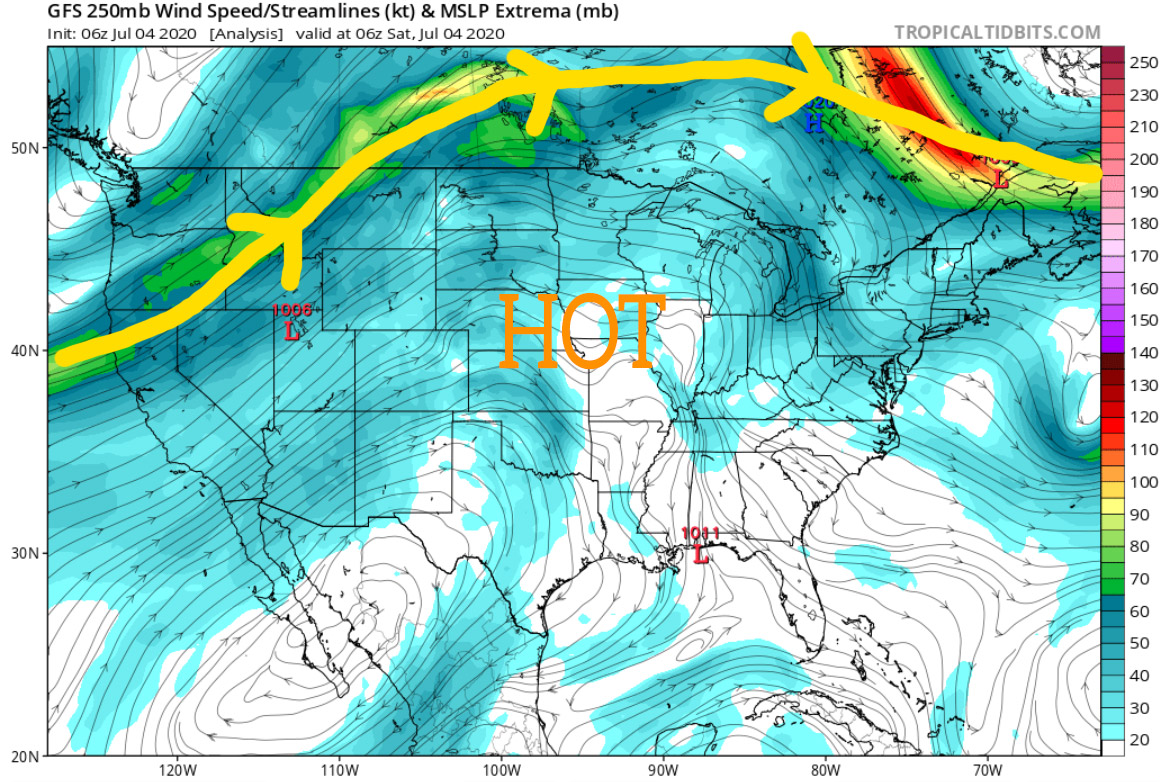 Saturday 7/4/20: When will the heat stop for Minneapolis/St. Paul?

Typically on the 4th of July in the Twin Cities, I feel like I’d be talking about storm chances. Will we get them? Will we not? Well, today it looks like we’re set to be quiet, but hot. Highs in the lower 90s, and that trend of near-90 highs continues for the foreseeable future.

So what’s happening? Well, we’ve seen a ridge in the jetstream (the river of air about 10 miles up in the atmosphere) caused by a blocking pattern. What does that look like, typically, this time of year? Here’s a graphic from the National Weather Service:

You’ll be amazed in about two seconds when you see what our current upper air/jetstream pattern looks like for today across the United States:

So now that we’ve established that Minnesota, along with much of the United States, are in a blocking pattern, which is making us hot — when does it end?

Blocking patterns can be tough to move. A very strong system to clash with it, often, to disrupt it. To cause it to become more “progessive” of a pattern.

The first chance comes Thursday, as a very minor cold front comes through — it’s not enough to disrupt the blocking pattern keeping us hot. It does seem to be the disruptor, though, and because of that by Saturday the top of the ridge/blocking pattern sags southward:

So our friends in Michigan might get a brief break, but in Minnesota we climb right back up into the 90 degree range. Look at that high pressure zone over northern Texas. That re-develops and keeps us hot.

It’s really not until the middle of next week that I can see the first significant cooldown on the way:

That image above is our temperatures forecasted for Tuesday the 15th of July! They’re temps about a mile up in the atmosphere and in Celsius, but they’d convert to surface temps back in the 70s for some folks after a cold front passes.

Stay tuned, and stay cool, and have a great (and safe) 4th of July holiday!