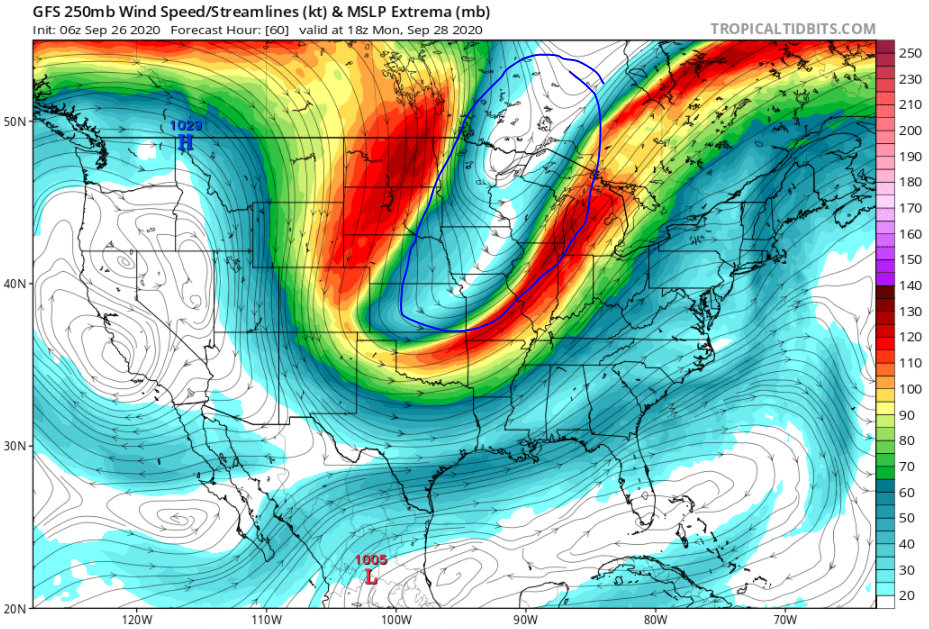 We’re looking at a significant change in temperatures as we head into the end of September and start of October. Not a huge surprise — but yesterday when we were in the middle 80s in Minneapolis/St. Paul you wouldn’t have thought about it.

Here’s a look at our extended forecast over the next seven days:

Today we’ll see some clouds while we wait for a shift in the jetstream to come through, and then our first chances for shower activity comes after a breezy Sunday.

Here’s a look at the jetstream from the past 24 hours:

Note the warmer air indicated by red arrows, south of the jetstream, and the colder air to the north. That’s our next system, as of this morning.

Things change significantly as a trough of colder air digs south over the Midwest tonight, but especially Sunday to Monday and beyond. Here’s the jetstream forecast for Monday:

Luckily this is just a temporary “glitch” in our already-cooled temps, as we climb back near 60 Tuesday and Wednesday. Then we get another dose of colder air as we round out the week.

The good thing about this time of year is that storm systems and troughs and ridges in the jetstream are very progressive, meaning they move quickly. Despite this first (or is it second, after our cool stretch in September?) dose of true October air, we’ll likely warm back up into the middle 60s or even lower 70s with some upcoming ridges in the jetstream over the next 10-15 days.

Stay tuned, and keep an eye on those end-of-week temps!