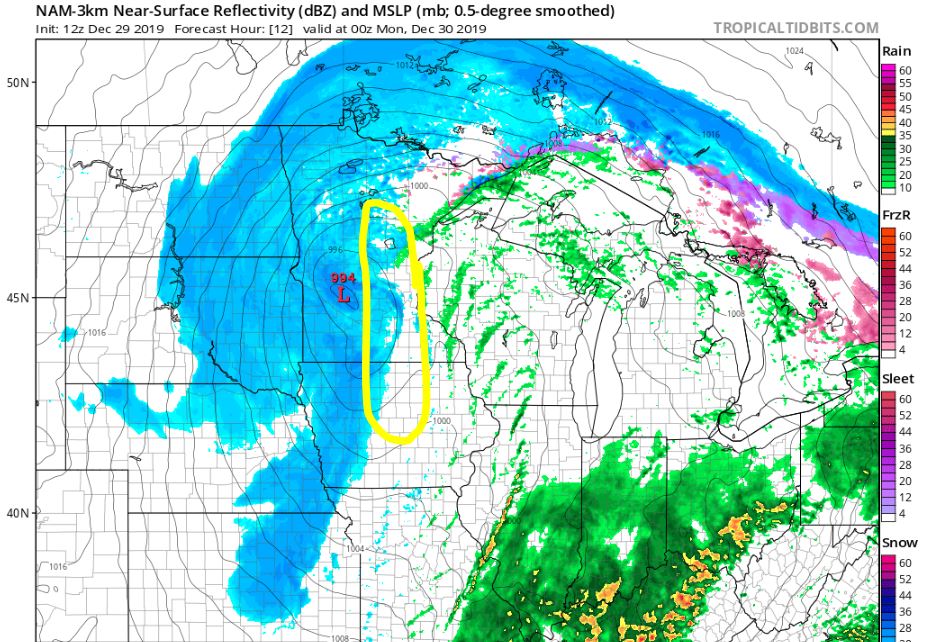 If you were hoping to get out of this weekend’s ice and rain event unscathed, that option is now off the table in Minneapolis.

We’re seeing signs of our weekend storm retrograding/backtracking, and that path, paired with a deepening low pressure center, means snow gets pulled in from the North in Minneapolis/St. Paul, and much of eastern MN. It’s an unusual direction for a “real” snowstorm to come from in Minnesota. (it’s somewhat of an example of the Fujiwhara Effect)

Here’s the future radar as snow first starts to *try* to move in tonight, around 6-7 p.m.:

If you look closely, you can see Hennepin County is in my circled section. That bulge of blue (snow) is what some of the forecast models are showing as the low retrogrades toward Sleepy Eye, MN.

After that, which may just be snow in western Hennepin County, or may not be any snow at all, we then have to wait likely until Monday morning for the next batch of snow showers.

You can actually see that the models have pulled in another low pressure center to the overall circulation (see Fujiwhara Effect, mentioned earlier — sort of) that is over Michigan in the image above.

That’s an aside, as we’re still in the midst of snow. If you’re looking for the the heaviest period will be, I’d have to zero in on afternoon to evening. Here’s one clear example of more moderate snow:

Finally, as we head into Monday night/Tuesday early morning, we see the snow dry up as the storm slides east. It looks like accumulations should end by around midnight on Monday night, and Tuesday we’ll see some peeks of sun gradually move in.