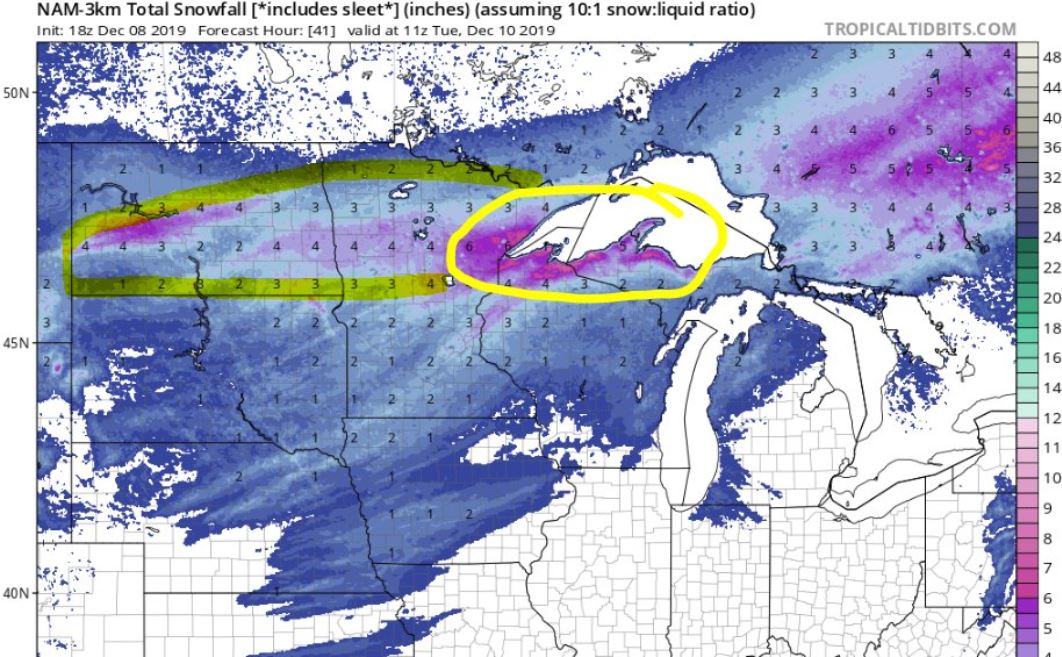 That being said, we have some serious weather to talk about.

SNOW TOTALS AND TIMING FOR MINNESOTA

Well folks, here it is – the timing for tomorrow’s snow. As we’ve moved closer to the actual storm, totals have decreased, mainly due to overnight component fizzling out. Now we’re left with a wave of snow moving in closer to 5-6 a.m. Monday… just in time for the morning commute.

Here’s the future radar at 5 a.m. – and you can see some snow already over the Twin Cities metro area by then:

By early afternoon that band of snow will have shifted east, leaving us with at least 2″ of snow in its wake. Right now I’m expecting around 2.5″ of snow total in Minneapolis and St. Paul, with slightly higher totals (closer to 3″) in far northern metro.

This is just the beginning, though, as the reason for our snow is arctic air that’s been brewing for a week or so near the North Pole.

That cold air slides in as a trough/dip in the jetstream passes over the upper Midwest. This is the jetstream forecast for North America as we head toward Tuesday morning/midday – note that major trough/dip over Minnesota:

Interestingly – if you follow that map toward Alaska, you can see a high pressure ridge moving into that area that’ll actually bring Alaska and western Canada above-average temps.

For us, a much different story. The American GFS model brings down bitterly cold air by Tuesday morning – with air temps dipping below zero:

Thankfully, we’ll rebound quickly – as this is a somewhat fast-moving system. By Thursday we’ll be back in the teens, and by Friday potentially as warm as 30 degrees!

Good work Aaron! Thanks to your mom for sharing the link.