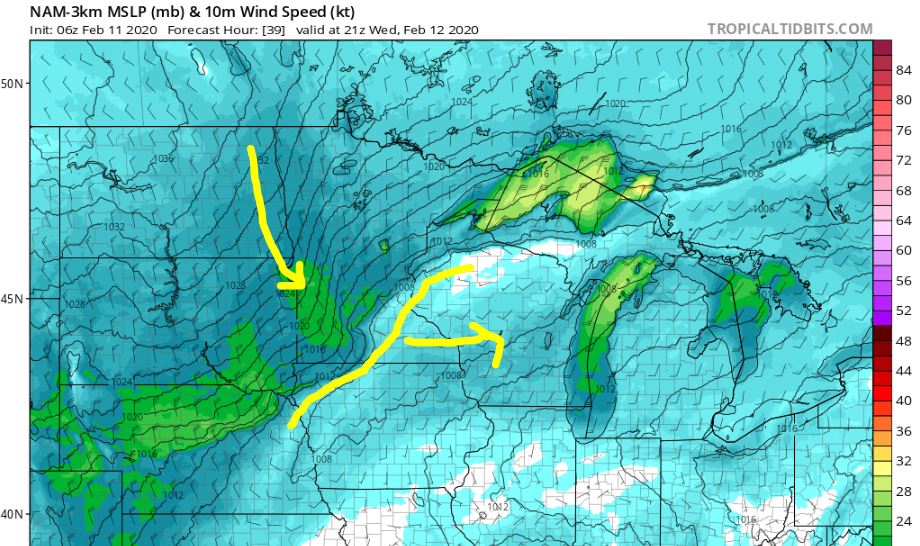 Our forecast continues to take a February-style roller coaster ride over the course of this week in the Twin Cities. Minneapolis highs near today and jump into the 30s Wednesday, then plummet below zero into Thursday.

Here’s a look at your extended forecast for Minneapolis/St. Paul over the next seven days:

So, Thursday will be cold. We know this now and you’ve probably heard it talked about. The details are what make it interesting.

First, Wednesday will have its own unique set of issues as well. It’ll start warmer, with a low down to only 22 degrees. Then midday we’ll see winds shift and strengthen – with a cold blast from the north – and light snow start to accumulate as well.

Those green shades on the map indicate winds near 20 mph, and they’ll be *cold* winds, shifting from SW earlier in the day to nearly straight out of the north.

With that wind shift comes light snow. Not a lot, but the timing and quantity (0.5″ to 1″) could snarl traffic and snow things down. Here’s the future radar view showing snow at about the same time as that wind shift:

Snow wraps up by late afternoon, with some lingering flurries into the evening commute. That’s when temperatures really plunge as the sun sets. We’ll see about a 35-40 degree swing between Wednesday’s high temps and Thursday morning’s low temps.

Stay warm and stay safe with the cold!