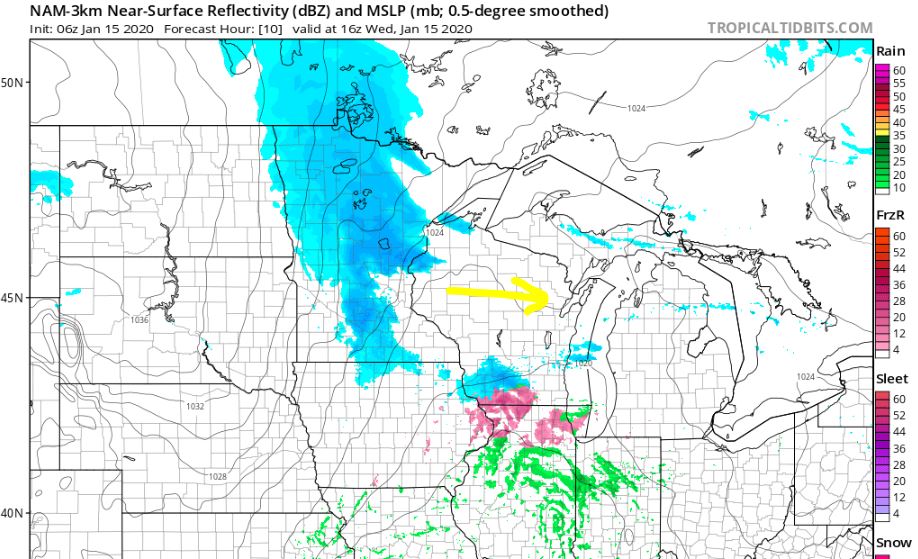 We’ve already picked up a few inches of snow in the Twin Cities this week, with Monday’s snow. Now we get another shot of snow today, and a much larger snowstorm coming in as we end the week and enter the weekend.

Let’s break it down by storm, starting with the small one today.

While northern MN looks to get the heavier snow totals out of this first – smaller – storm. Here’s the future radar showing snow approaching the Twin Cities by 10 a.m. this morning:

Snow today would be pretty quick for central MN/Twin Cities, with a quick half inch of snow possible, up to about 1″. Northern MN, from Mille Lacs to Virginia, could pick up 2″+ snow as the storm passes.

By 2-3 p.m., the storm has passed through Hennepin County:

Then it works its way out of the Arrowhead Region and MN as we head into the evening hours. Then we turn attention toward the larger storm for Friday to Saturday…

Friday to Saturday’s storm includes a number of unknowns – right now we don’t know the exact snowfall totals to expect, or exact timing.

However, snow does look to arrive by midday Friday:

At this point, I’m expecting somewhere around 6″ of snow, or more, for the Twin Cities, as this storm system matures over the Upper Midwest, and slides east.

You can see in the future radar image below, I’ve circled the center of low pressure for this storm:

Note, also, that in the two images above, that we’ve progressed from midday Friday to about 6 a.m. Saturday — with snow falling nearly that whole time.

Stay tuned for more info, but get ready for what looks like a legitimate snowstorm Friday to Saturday.